Home » Furniture » The Coffee Table That Became a Tufted Ottoman

I am so excited to share my newest furniture makeover with you today.  Those of who follow me may remember that when I photographed the Union Jack Coffee Table I had made for my brother, I discovered just how much I wanted a coffee table in our living room.  We have a decent sized space, which was great for toddlers running around, but we use our living room so much for gatherings, that it would be really nice to have a place to put drinks.  But more than a coffee table, I have wanted an ottoman.  I like putting my feet up when I sit down.

A couple years back Dear Lillie shared a tutorial on how she built a tufted ottoman.  I looked at Lowes and priced out the supplies determining that even building from scratch was going to cost a decent amount. So when I discovered this coffee table at a thrift store the day after I photographed by brother’s Union Jack Table, the creative juices got flowing.  I knew $15 for the solid wood coffee table with unique curves and turned legs could be the answer to my ottoman/coffee table dilemma. 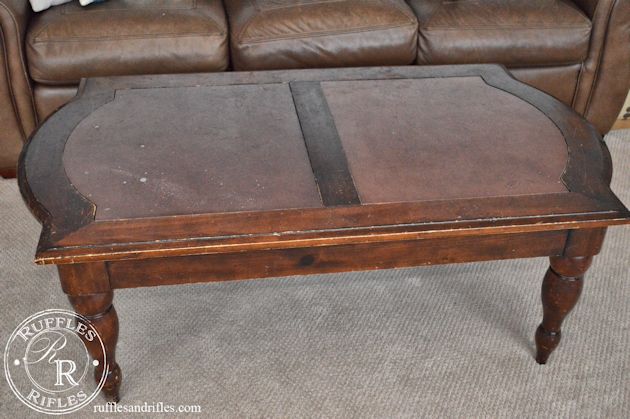 I explained to guests who visited our house for the month or so before I could work on it they were seeing a live “before” shot.  It was a solid piece, a little banged up cosmetically, but otherwise in perfect order.  The center pieces were also solid wood, but covered in some kind of 80’s vinyl extravaganza. 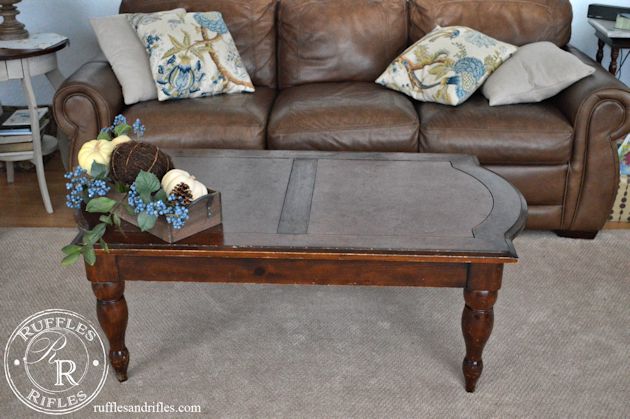 First I lightly sanded the piece on the deck, and the snow started falling, so it was pretty quick.  But I knew I would be covering it with MMS Milk Paint with the bonding agent added so I wasn’t too worried about a thorough sanding.  I used layers of Linen, Linen mixed with Curio, and Grainsack. 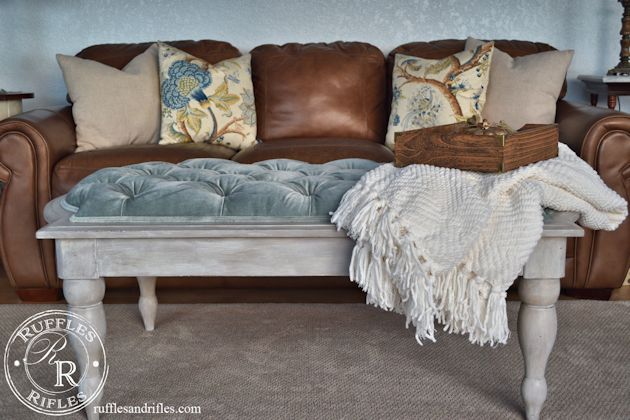 Then I sealed the piece with Mocha Burnishing Glaze.  I didn’t want to finish it with wax because I’ve heard in the bad heat it can melt, and while we do live in Alaska, our giant wrap around windows act as a greenhouse on sunny days, and it can get extremely hot. 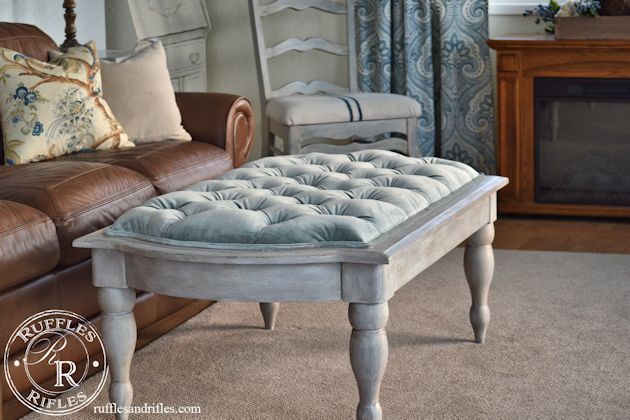 The most expensive part of the project was of course the 3″ high density foam.  I got it half off, but it still is expensive.  I followed an amazing tutorial from Addicted2Decorating for diamond tufting, and now have my own tutorial available here. 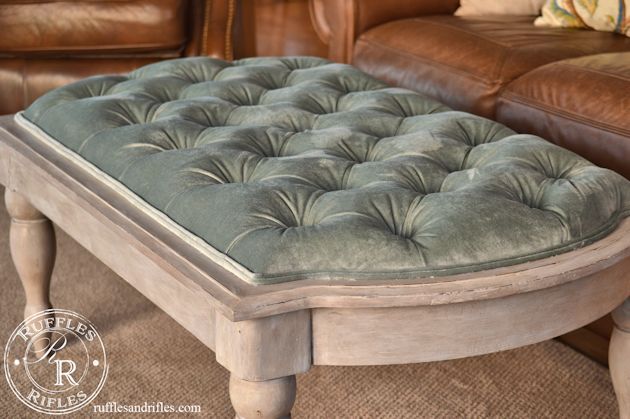 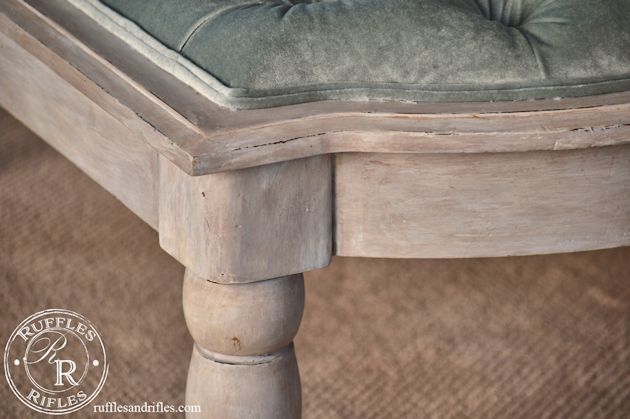 I considered making a tutorial as I worked, but I wanted to be sure I knew what I was doing first.  Sometime in the near future I will do a diamond tufted tutorial on a much smaller scale.  There are a lot of tutorials out there on tufting, and honestly, a lot done not so well.  I chose the tutorial who’s product, in my opinion looked the most professional.  And she did a great job explaining and teaching! 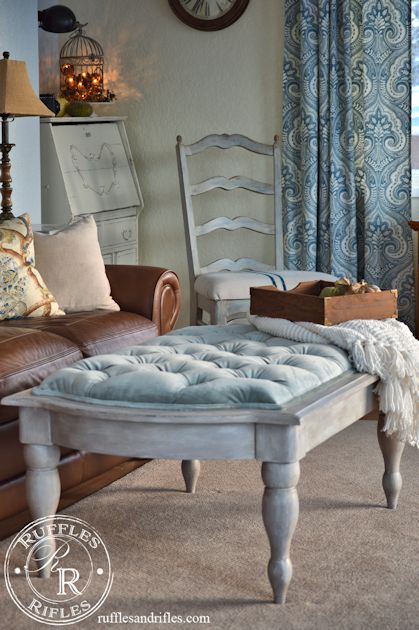 I was originally going to do the ottoman in linen, but after I painted it, the linen I had looked way too yellow next to the paint and it blended in rather blah like.  When my husband and I were in California last year and purchased fabric in the fashion district (see this post for that adventure), one of the gems I picked up was 2 yards of this silvery blue velvet.  I had thought about an ottoman at that time, but later determined linen would be better.  But when the linen option didn’t work out, and I saw The Inspired Room‘s velvet tufted ottoman via Pinterest, which was amazing, I decided once again I would like the velvet option. 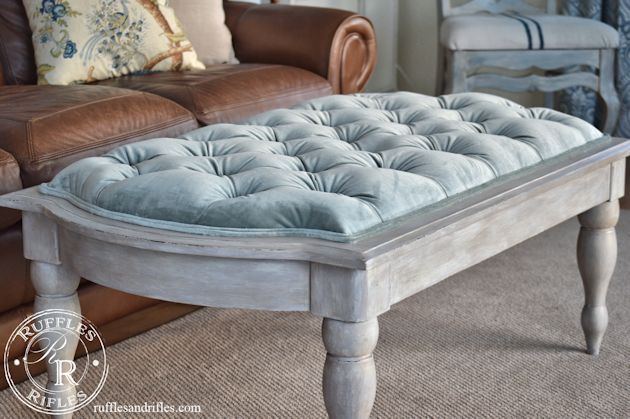 I used the screw and washer method for tufting (following Addicted2Decorating’s tutorial linked above).  Not authentic, I realize, but easier to say the least.  Then I covered the buttons and hot glued them over the screws. 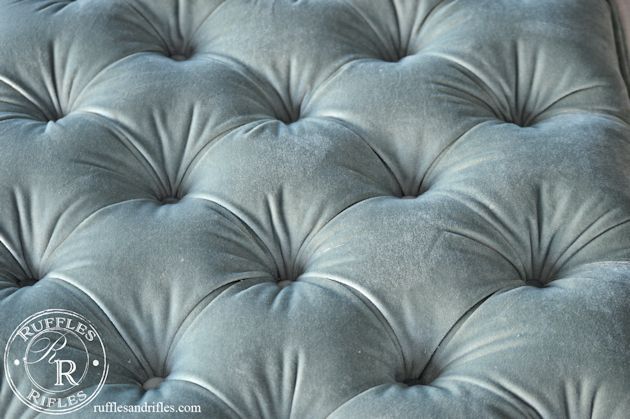 I decided to leave a bit of the frame for two reasons.  One, I thought it was really pretty.  For two, I only had enough velvet for that width because I had previously made a throw pillow from the same material.  I decided finishing with double welting would leave it looking more professional.  Which is true for the most part.  Until you see one small section… 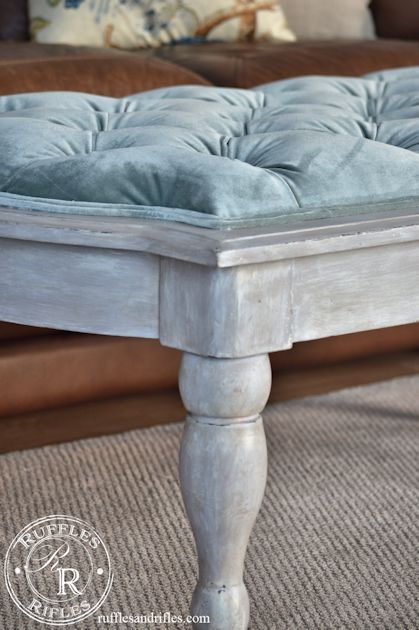 You see, velvet has a wale, just like corduroy, meaning the fibers lean a certain direction and it looks a different color if they are in opposing directions.  I learned about this in high school when I cut out a jumper out of red corduroy, the back and front I cut different directionally.  Let’s just say that one ended up contributing to the garbage bin.  So I knew about this wale as I made the welting, and was careful, so I thought to work with it.  Apparently not careful enough.  My husband says it gives the piece character.  It actually makes me the perfectionist laugh a bit.  I was just thankful it’s for me and not a client, in which case I would have probably cried. 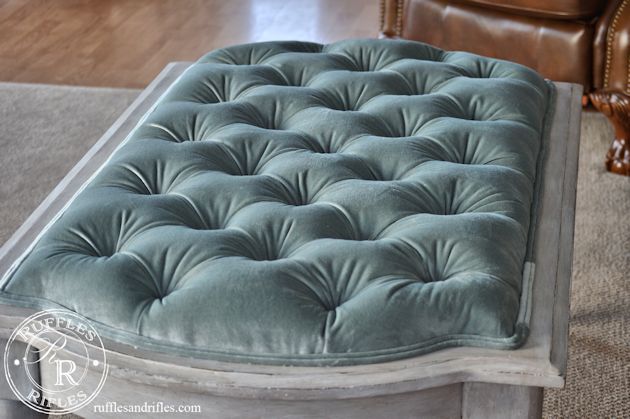 All in all I’m pleased with my tufted ottoman.  It’s not perfect, but I am giving myself some grace since it is my first tufting project.  I learned things that will be beneficial for the future of my tufting projects. 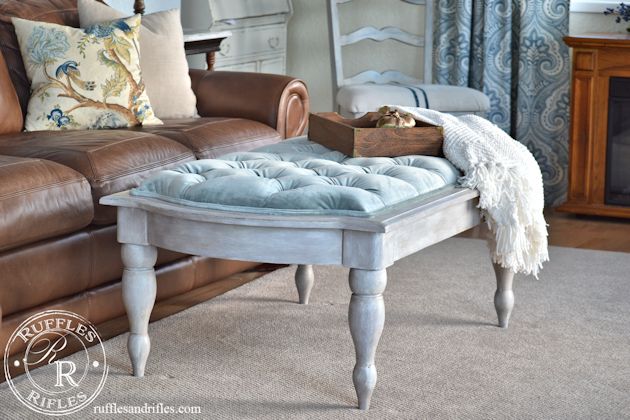 And I’m still looking for a tray.  I want a rustic looking wood tray to balance out the velvetness against brown leather and a house full of males.  Until then, the little rustic wood letter tray is going to have to do.

All in all I really love it.  It looks so inviting to snuggle into the couch with a throw and put my feet up, and I don’t even like to read!  Ha.  At any rate, I’m pleased with my newest furniture learning adventure. 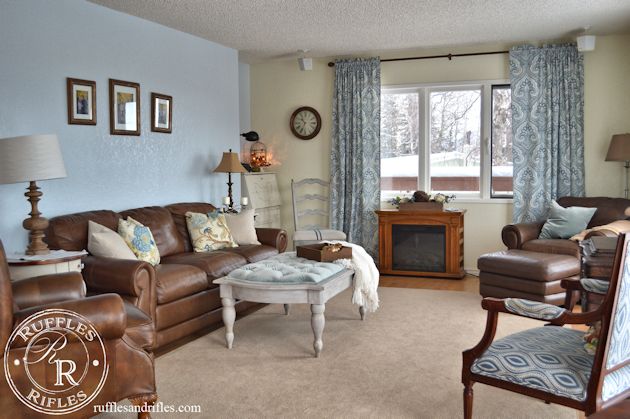 Thanks once again for stopping by!

To see the tutorial I have since made on making your own tufted ottoman, click here.  And be sure to pin and share away!

Making It In the Mountains

From My Front Porch To Yours

The Chronicles of Home

27 Responses to The Coffee Table That Became a Tufted Ottoman