Can I be really honest with you?  Like really honest?  I almost tossed this blog post before I posted it.  Had it been in the days before computers, I would have ripped it out of the typewriter, wadded it up and thrown it in the waste basket, many times over.  It’s not because what I made didn’t turn out, the boots turned out just as I imagined.  It’s not because the photos didn’t turn out (although I am well aware of my lack and still desire growth).  I think the reason I wanted to discard this before it even saw the light of day, was because in this processing journey, I am finally getting comfortable in my skin, however, revealing who I am to the world makes me feel a bit vulnerable and bare.  I know, to you it may seem like a simple, silly post about a baby’s boots.  But it’s also deeper than that, it’s also a desire to see you comfortable in your own skin.

My hope for every post is that you will leave inspired.  To be inspired literally means to be breathed on by God.  So whether you are inspired to create, or inspired to fully live by the living Word of God, I feel like I have been faithful.  I have never wanted this to be a place to simply show and tell, I desperately want to inspire in the process of creating beauty and being restored.

Perhaps, the greatest gift of my childhood is the innocence in which I perceived life.  It was not until retrospect revealed years later, that what I thought was a simple child worldview, may have been closer to reality than my mixed up teenage and young adult years dared me to believe.  My childhood world consisted of creating, mostly sewing anything I could imagine.  My mom says it was constant.

In my narrow worldview, I thought these things were normal.  Normal is relative to our worldview, after all.  I could sew as easily as I breathed, what I saw I made.  I thought all kids did it naturally too, because I did. 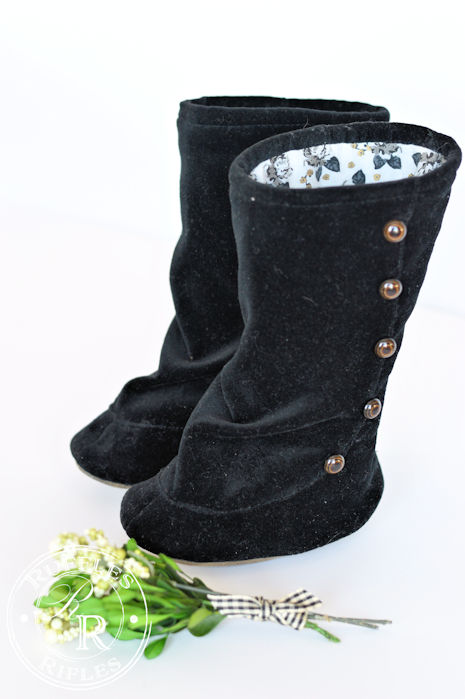 Clues of my destiny showed up in fourth grade.  Every single report or project took the form of something sewn or created.  After reading L.M. Montgomery’s Emily trilogy, I decided to make button boots for my book report, because after all, Emily surely wore button boots. I was obsessed with button boots, and knowing the real antique pairs were economically unattainable, I decided to do the next best thing and make a pair out of felt.  I saved a few of these childhood projects, and now, having a 3rd and 5th grader myself, I am a bit amazed at the workmanship that was just normal to me.  It may have looked like I had parental involvement, but I can assure you, it was all my idea and work. 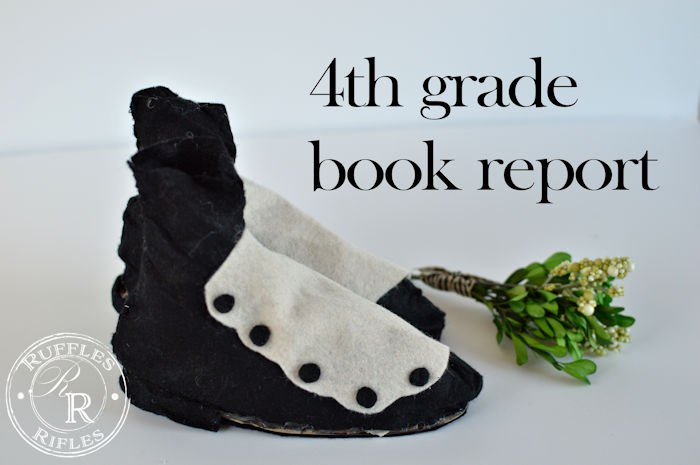 I’ve been on a bit of a journey of retrospect as of late, and I have observed not much has changed from that 4th grade girl who brought in button boots for a book report.  Last week I bought a black velvet blazer at a thrift store, re-imagining the velvet for something else of course.  But after I made my daughter her Christmas dress, (which will be shared in another post) I decided she needed some new footwear, and so why not black velvet button boots?  I gathered inspiration, sketched a rough drawing, and drew a crude pattern.  After I was sure it would fit my 15 month old daughter, I took apart some Robeez boots that my 4th son had toddled in until he wore a hole through the toe, repurposing the leather soles that were still in perfect condition. 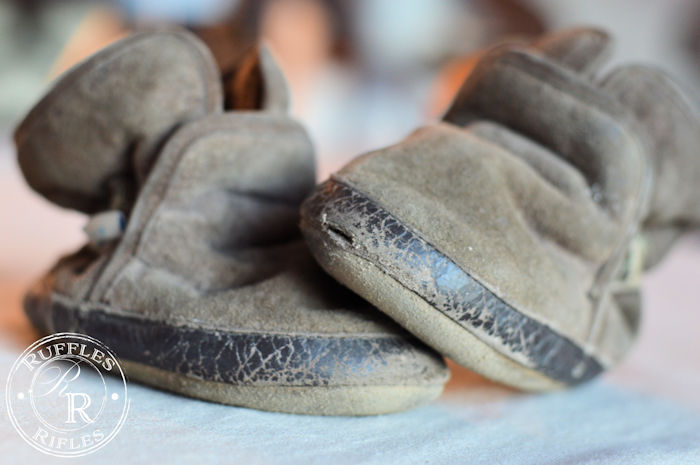 And so, for the second time in my life, I made a pair of button boots.  Repurposed soles became a revelation of the purpose of my own soul.  The ability and desire to create something out of something else, actually had been unknowingly stifled for a good portion of my life. 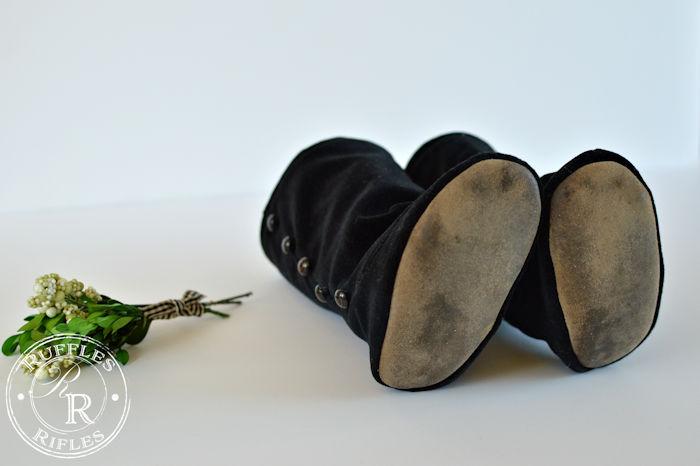 To be perfectly honest, I didn’t know what to do with it in the context of church, Bible college and making a difference in the world.  So I discarded it as the unspiritual, non-redeemed, un-important part of me, instead of recognizing creativity in context as a child of God, being an imitator of the one who initiated creativity in the first place.  I so desperately wanted to make a difference and to follow God with all my heart, soul, mind and strength, that I brushed aside the creativity as a wordly nuisance.  In my mind, in order to make a difference for God, you could do one of two things; church ministry or become a missionary.  But my narrow worldview not only limited me, it limited God.  How dare I limit His glory to my own finite definition of ministry?

God didn’t call people of influence to only work in the church, not in the Bible and not now.  In fact, the God who creatively made the earth and sky, also anointed a craftsman named Bezalel to make the tabernacle functional and beautiful.  God’s vision of the tabernacle was and is to give us a picture and a copy of what we will eventually see in heaven.  A craftsman was commissioned with nothing less than to reveal heaven on earth.

What if, we all started seeing who we were in all our uniqueness, as the ones who have been anointed to reveal heaven?  Would we live each day differently?  Would moments be brushed aside or held as holy? 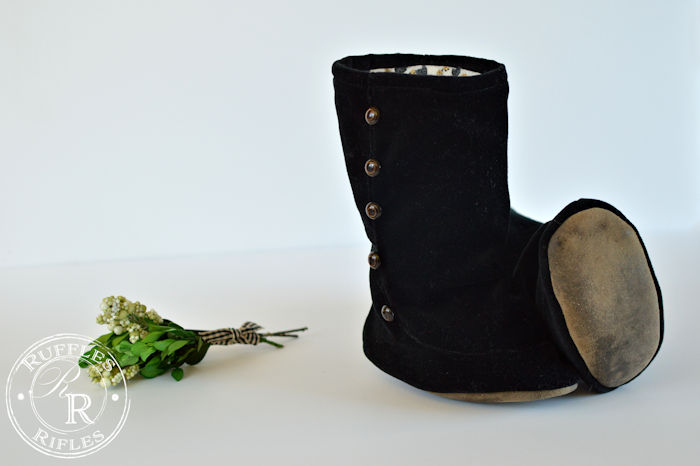 How do black velvet boots reveal heaven?  To be perfectly honest, I don’t have an eloquent answer.  Except for this.  My God, is the Creator of all things, and He has given me a mind and hands to create.  As a reflector of his glory, that is what I can offer as the best that He’s given me.  Thirty years ago, it was in the form of a book report.  Today it was repurposed soles for my daughter’s feet.  He never stops creating, repurposing, restoring and making things beautiful, for his glory.

What’s your soul’s purpose?  Does your heart leap with an answer?  Or are you so busy or run over by life that you’ve forgotten to let your soul breathe?  The makeup of your soul has a unique expression to bring a revelation of heaven to earth. Sometimes, over the course of life, the soul’s ability to breathe gets snuffed out.  We get distracted by fashion and culture that tell us what is and what isn’t.  Well-meaning friends and family encourage us in what is reasonable and appropriate.  We get boxed in by what we understand is spiritual and honorable.  Then, the reality of heartache and failures run the tire marks of disenchantment over our lives.  And we get lost.  No matter where you’re at, if you’re 19 or 99, if you’re walking out your destiny or feel defeated in a prison, your sole purpose will be brought to life by the One who breathed and inspired your soul to live.

Pay attention to the activities you did as a child, the ones that were natural, that brought you simple joy.  Those are very often a window, in the purest form of who God designed you to be. 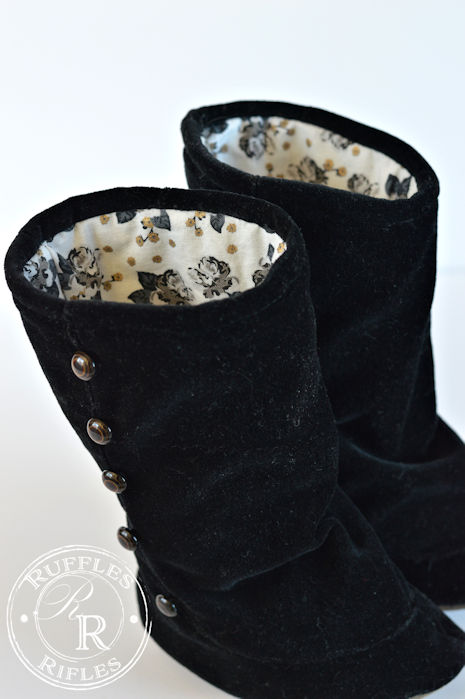 Now, as a woman in my late 30s, I can look back on my childhood, and see clearly the things in everyday life that were a largely indicative of who I was going to be as an adult.   I think my perception of the world as a child was really a window to experience and be who I was meant to be, before anyone else convinced and compelled me to do and be otherwise. 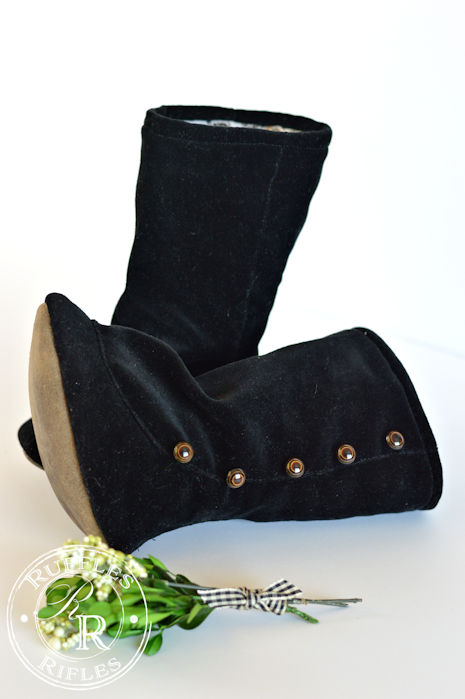 Colossians 4:17 commends us, “Whatever you do, whether in word or deed, do it all in the name of the Lord Jesus, giving thanks to God the Father through him.”  Every gift we have been given is meant to be used and multiplied to bring glory to the One who initiated all things, and to reveal bits of heaven on earth.