There was a time I was only buying acrylic drinking glasses.  We found several sets at Costco, and I reasoned, with a young family, that would be the most logical solution to inevitable breaks.  So for many years we had acrylic glasses.  And they weren’t terrible, but I started to feel a longing to be a grown up again, and drink from a glass that was actually made of glass.  Do I sound silly?  I don’t know, I think drinks taste different out of glass.  Not only that, the acrylic glasses clouded up and looked awful, and eventually they started to crack and have leaks.

A few years ago, I started thinking about real glass glassware again.  Part of it was when we would have guests I would be choosing between the acrylic glasses and sippy cups.  In addition, I was starting to see everything through the lens of a camera once I started my blog, and suddenly, I really wanted glass.

I looked at stores for sets that didn’t seem ridiculously overpriced, that had a vintage voice to them, and I always came home with nothing.  I almost had my husband pack home some Anthropologie glasses on a trip, but I couldn’t justify the price (or the risk of breaking on the trip home).  But then, I was reading the first issue of the Magnolia Journal, where Joanna mentioned she had a collection of mismatched vintage water glasses.  I loved that idea.  That way, if one broke, you wouldn’t be out on an odd number of glasses (which was one of my main hesitations in having glass with a young growing family).  And two, it would be a game of finding pretty vintage glasses.  But would I find any in Alaska? 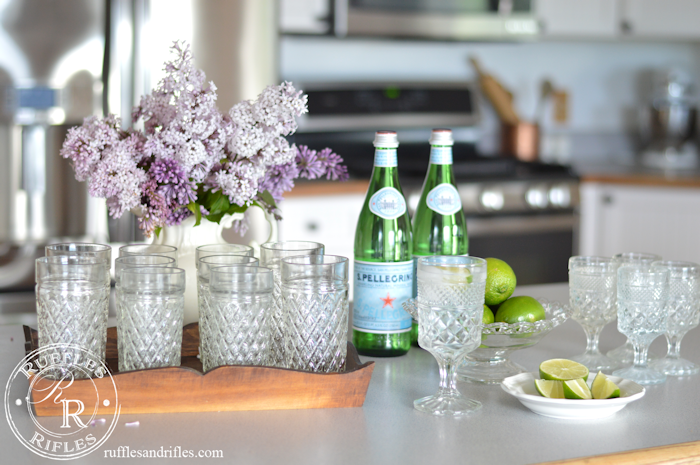 So, as collections go, I started with one.  A pretty water goblet I found for 75 cents. 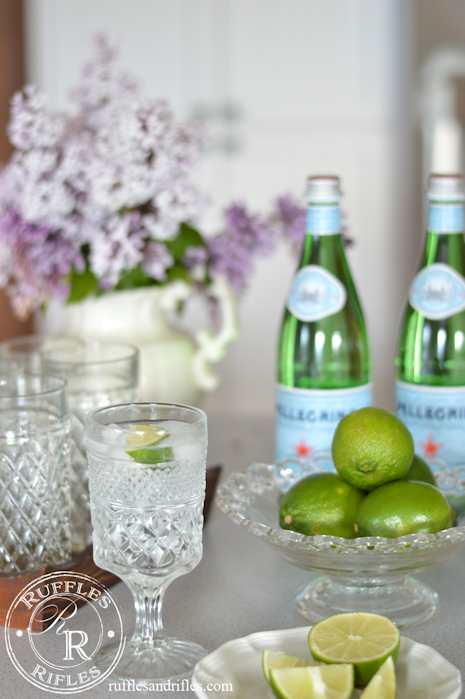 Then, much to my surprise, I found six coordinating water glasses a couple of months later at a different thrift store.  I scooped them right up.  But they were dingy, cloudy, like they had been clear but the years and possibly dishwasher film had left them less than brilliant.  So I worked some magic with a soak in baking soda, white vinegar and dish soap.  And would you know, they came out sparkling, like they were brand new!  I was beyond excited.  I finally found real glass glasses I liked, and they were $1 a piece. 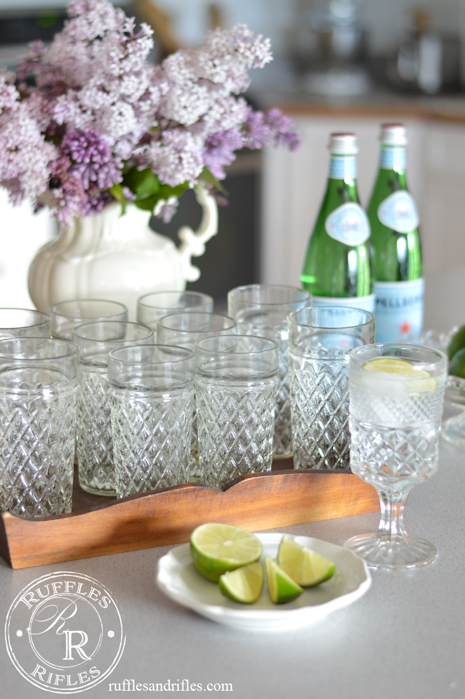 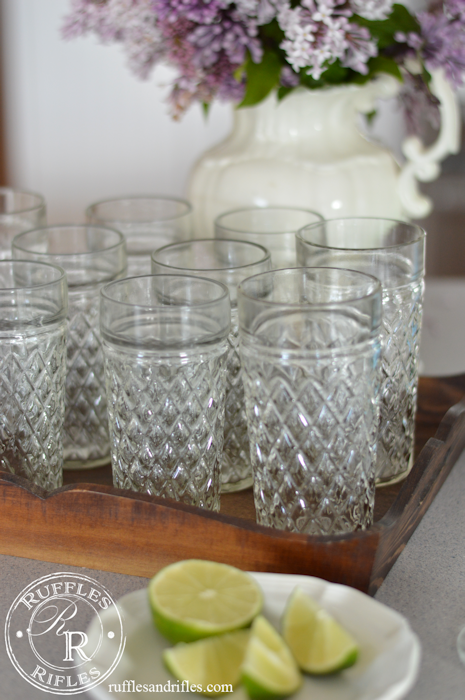 A few weeks later I happened upon the same set of 4 wine goblets.  I scooped them up and this time decided to document the transformation.  They were dingy, and now, after a half an hour soak in the baking soda, vinegar and dish soap, they shine as well. 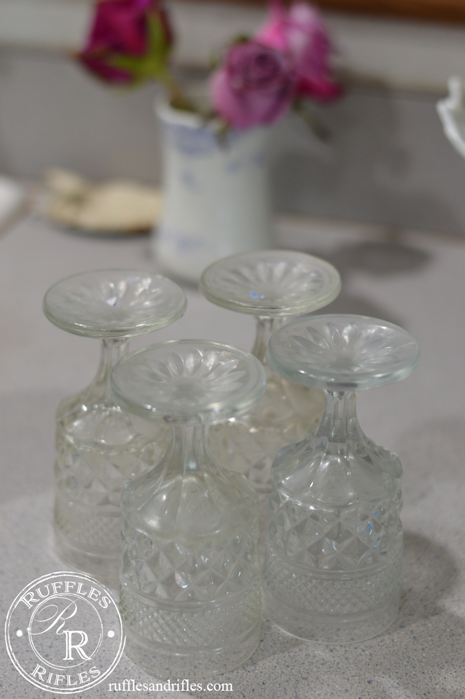 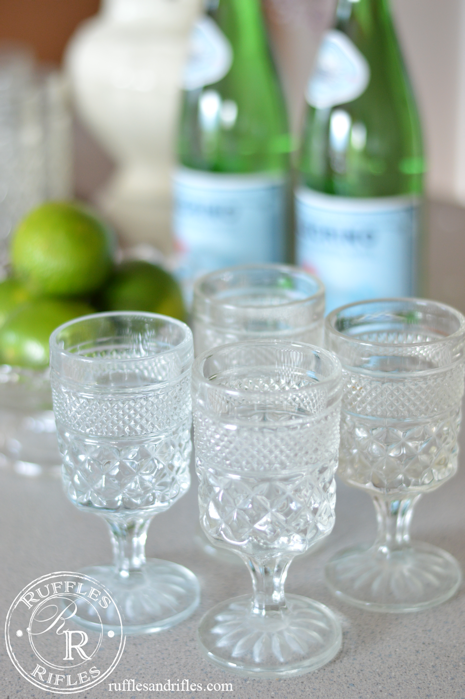 Then two weeks ago, I found 4 more larger water glasses of the same set!  I couldn’t believe it. I had no idea I would keep finding pieces to the same set, I just was going for vintage looking glass, something that I liked.  I am always keeping my eye out for more.  You never know when one will break, and truth be known, we have a lot of guests.  But I am so thrilled with my collected set of vintage glassware. 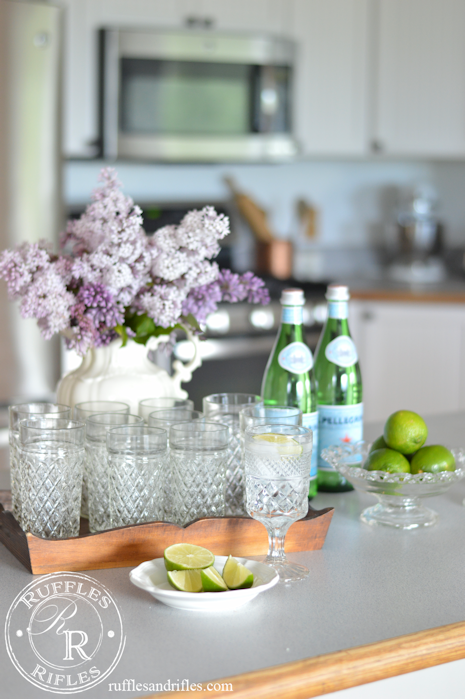 Put ingredients in a large sink, and add several gallons of hot water.  Let the glassware soak for 30-45 minutes.

Finish by cleaning with a soft rag.  Rinse and towel-try with a lint free towel.  (Below is an image for you to Pin.) 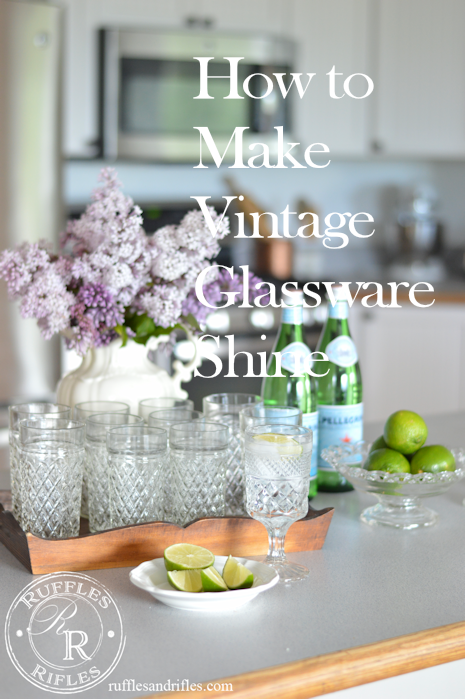 I was watching reruns of Fixer Upper last week, and wouldn’t you know, in one of the design scenes, on the table was the exact water glass!  I must have good taste.  🙂 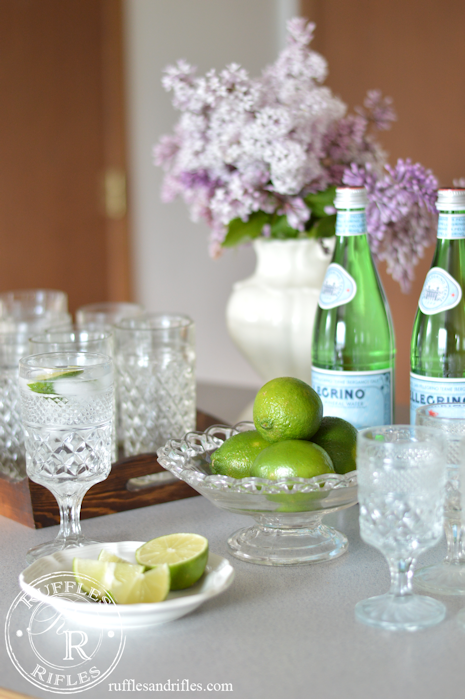 Have a great day!  Thanks for stopping by!