Well, we have survived the marathon move and are settling in.  It was a crazy move, as we were literally trading houses with our renter.  The house we moved into had been converted to a duplex the last four years as a rental. It had been my in-laws for 21 years, and before that my husband’s great-grandfather’s.  The downstairs renter moved out about two months ago, where upon we started renovations: knocking out a wall, changing around doors and doorways.  We got new berber carpet for the family room and one of the boys rooms.  Then, a week after we had the carpet installed, we walked into a completely flooded basement!  I cried, of course.  A pipe had broken during the winter when someone hooked up a hose.  So, it set us back a bit, but amazingly, we still were able to move according to our original timeline.

So on Friday, we moved all our downstairs stuff to our new downstairs.  We cleaned and touched up paint in the downstairs, and the renter who was renting the upstairs at our new house moved his stuff to the downstairs over the weekend.  The boys had a slumber party in the living room for four nights.  It felt a bit like chaos.  Then Monday we cleaned the upstairs of the new house and did renovations — new floor in the master bedroom and hired out painting the kitchen cabinets.  Tuesday was the final move day, we moved all our upstairs stuff to the new house, which was still undergoing cleaning and renovation.  Then we cleaned the upstairs and the renter moved in on Wednesday.  It was crazy, but it worked!  And we are so thankful to be in this new place.  More on that in later.

But, today I will share with you another project I did as we packed.  It was creative therapy, truly.

For the last twelve years, I have had an ugly 60s/70s vintage pressboard nightstand.  I have never liked it.  But nightstands are not cheap, and well, all things considered, it just has not been that high on the list of priorities. As we have been working towards this move, I had been frequenting the thrift stores even more lately, looking for furniture and bedroom curtains and other things that would fit our new space, even temporarily so that we don’t far exceed our budget on the little things.  Eventually, the whole house will succumb to my vision, but there is always a point to embracing the process.

Several of weeks ago, as I was stopping by one of my frequently visit thrift stores, I spied a vintage sewing cabinet, behind the store.  Sometimes that is the best place to look, before it hits the showcase floor, and oftentimes, before it even has a price tag on it.  In this instance, it had neither.  And the main person pricing was gone at lunch.  When I spied the cabinet I asked how much, although solid wood, I pointed out there had been some rabbit pellets inside.  Weird and random, but it didn’t smell like rabbits had actually lived in there, so I was okay with it.  And I was more than okay with it when the lady told me, $5!  Uhm, yes, I’ll take it. 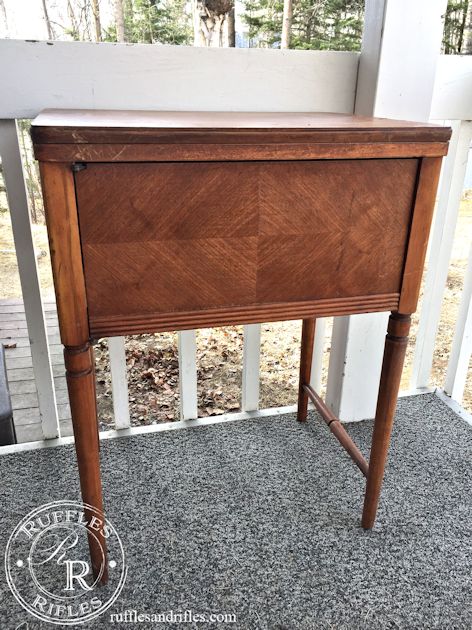 So I brought that little table home, and though the smell wasn’t bad, it was peculiar.  So I doused it with baking soda and let it sit for about a week.  All odors were dissipated.  Victory!

I added a wood applique from Home Depot for $7.  As I continue to gawk over furniture people find for next to nothing in the lower 48, I have been learning to be more content and not as outrageous about my taste and what I can find in Alaska.  So this isn’t French Country.  It’s really mid-century modern.  But, it was solid wood and something I could creatively re-use and make even more feminine, and farmhouse-ish.  And I am pleased with it. 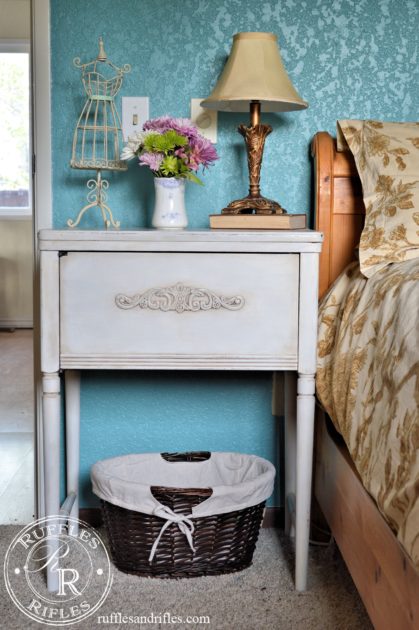 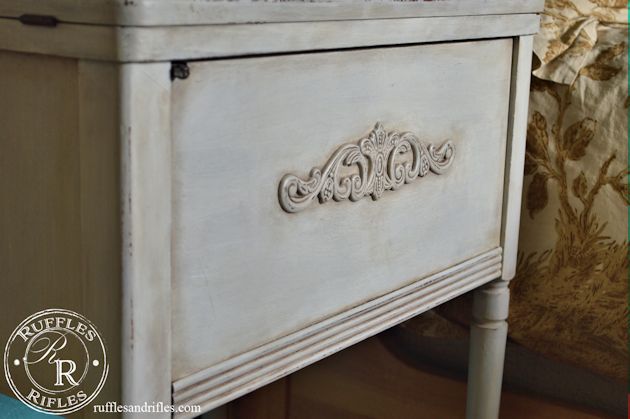 For some reason, for this piece, I was feeling milk paint over chalk paint.  And I wanted white, but layers of white.  When you do layers of a similar shade it gives depth and dimension and age with a new paint job.  And I just love layers. 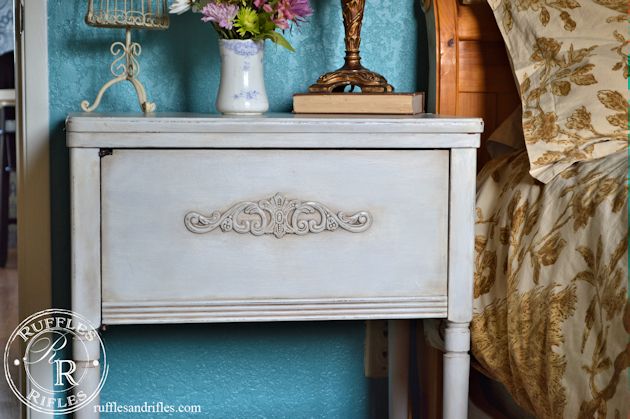 I did two layers of MMS Grainsack with the bonding agent.  Then I did a layer of MMS Linen.  I have leftover some other milk paint from the Milk Paint Company that was Pearl. I’m not overly fond of this white, it’s a very ashen white, but I knew in layers is would be fine and just add dimension.  Then I finished it off with another layer of Linen, so bring back some warmth and creaminess. 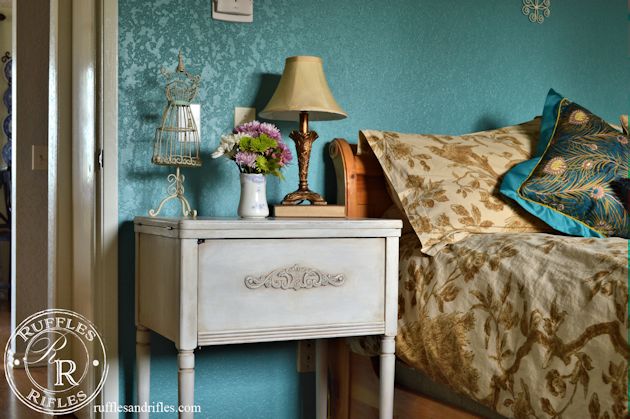 Then I waxed it with MMS furniture wax, and added some antiquing wax to the edges and crevasses.  I think this made it pop.  The photos I took I feel don’t do it justice.  There really is a beautiful subtle warmth to the table that I was unable to capture. 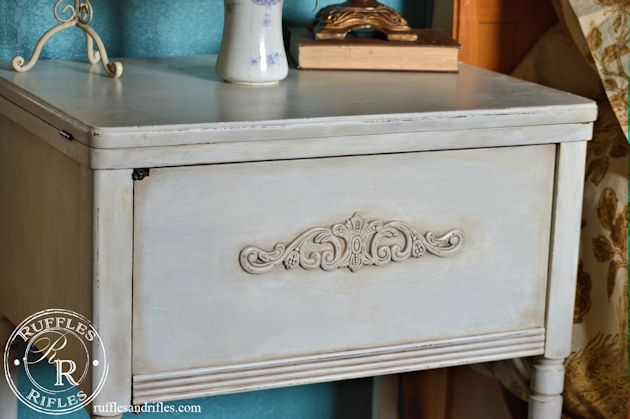 (I’m so excited to be in our new, more neutral colored bedroom in our new house!  And the master bedroom is coming along.)

But all in all, a $5 table plus the $7 applique and it looks so much better and so much more me.  I kinda like the fact that it is an old sewing cabinet too, considering how much I love to sew!

Eventually, I want to put a shelf inside.  Right now it is a functional table.  So until all the craziness of the move dissipates, I’m content with my new pretty table.  And thankful once again for little creative projects that are kept my sanity along the way!