Home » Devotional » Nothing is Wasted: A Tale of a Scandinavian Rocking Horse

Before our sabbatical, I found this discarded rocking horse at a thrift store.  The raw wood, and the fact that it was a rocking horse beckoned me.  Despite the puppy chew marks, I couldn’t resist.  Another challenge to make something beautiful.  I couldn’t resist.  So I purchased it and hid it under my table in the creative studio, until we were home again and inspiration struck.

One evening in September, I had two projects I was working on simultaneously, my plan was to paint back and forth between layers of a nightstand I was remaking and a the thrifted wooden rocking horse.

I had already done all the prep work for both pieces. It was time for the fun part.  They were ready to be beautified. I had prepped this small wooden rocking horse I had found before our sabbatical with a coat of weathered oak stain and then a layer of Provincial, just to give it a base that spoke of rich years it had experienced. And truthfully, I thought of keeping it that way. There were nicks and dents that the stain deepened, and it looked almost like it could have been an antique. 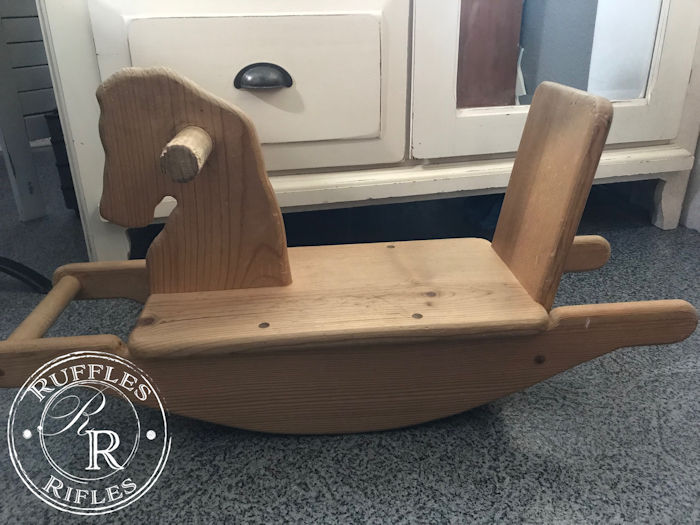 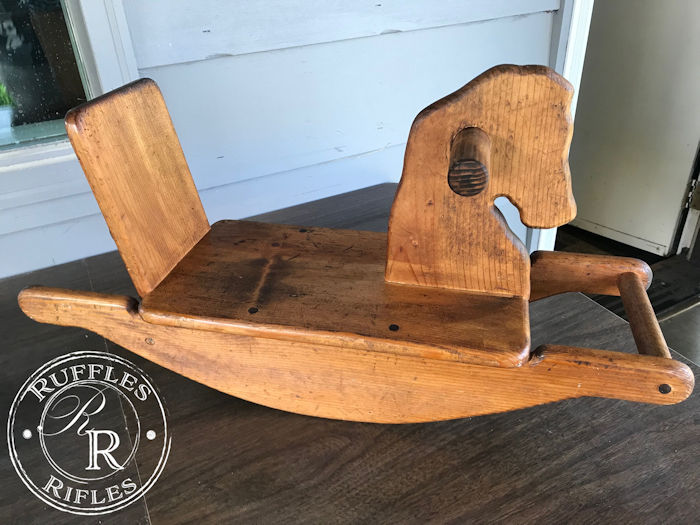 But I had a plan and a vision for this sweet, toddler-sized rocking horse, and so I continued on, mixing up some milk paint. I planned for it to have the appearance of an antique with layers of chippy paint, Miss Mustard Seed’s Shutter Gray showing up beneath flakes of Grainsack. But after my second coat of paint, I realized the paint was soaking into the wood too much to chip and my resistance layer failed, and instead of an antique reproduction this just looked like DIY Gone Awry (it’s a thing, I’ve bought those discarded projects at thrift stores to fix). So I wiped off the paint with a wet rag and went for try number two. A simple white wash seemed fitting. I watered down the Grainsack to go on thin. And it looked fine, but I knew it’s potential far exceeded what was before me.

I went to bed that night, instead of being energized by creating, I felt deflated, like I had wasted my time, energy and supplies. I was completely dissatisfied with both the rocking horse and the nightstand. I even regretted painting the little horse at all. I should have left it stained and let the beauty of the worn wood shine through. But now that milk paint had soaked in, I was committed to color, forevermore.

I began contemplating regret. How powerful and taunting the emotion can be. Feeling like we ruined something forever is helpless (as little as paint on a rocking horse seems). The most dangerous thing of all about regret is it can paralyze us from moving forward. There is never a regret too far from that the grace of the cross that it cannot be redeemed.  The same is true for our lives.  We make a mistake that seems to alter the course of our lives.  Or worse yet, other people’s choices imprison our hopes for a future.

When God calls us his crowning creation, does He ever sit back in disgust with us, like I did that rocking horse?  Thinking He made a mistake, when we make one?  I had such good plans for them, too bad they messed it up, now they’re going to the garbage.  It’s easy to say the right answer, but sometimes harder to embrace it.

Genesis tells a tragic story, of God regretting making humankind.  However, the story didn’t end there.  A powerful conjunction indicates redemption through a person. “But Noah, found favor in the eyes of the LORD.” Regret may bring floods or disaster; it may tell you it’s the end. But the world didn’t end with a flood. God made a rainbow to remind us that no regret is too powerful not to be redeemed.

So at this time of year, along with all the glitter, parties and carols, we recognize our mistakes, our sins, our failures; but then we look and behold a baby in the manger.  But God, so loved the world He gave his only son.  Praise be the Lord, the God of Israel, because he has come and has redeemed his people.  (John 3:16, Luke 1:68)  That baby, wrapped in swaddling clothes and laying in a manger ensures redemption for all who believe.  It ensures a story that doesn’t end in mistakes or regret, that he who created a good work in you will be faithful to complete it.

The rocking horse. It would have been beautiful in wood stained glory. But there was another story to be written.  For over a month, that little rocking horse sat and sat in my creative studio, every time I walked by it threatened to tell me how I made a mistake, how I failed.  I tried to override it with what it could look like, but no idea seemed right.  I thought about a Swedish Dala horse, but truthfully, I don’t like that many bright colors.  But then, one day, walking through the Target Christmas aisles, perhaps a few weeks too early, I spied a stack of Christmas cards.  That’s when I knew the destiny of my little rocking horse.  It was so be Nordic in nature, with a deep Artissimo blue accented by gold folk art.  There was just one problem, I don’t paint, not really.  But sometimes, you just gotta try new things. 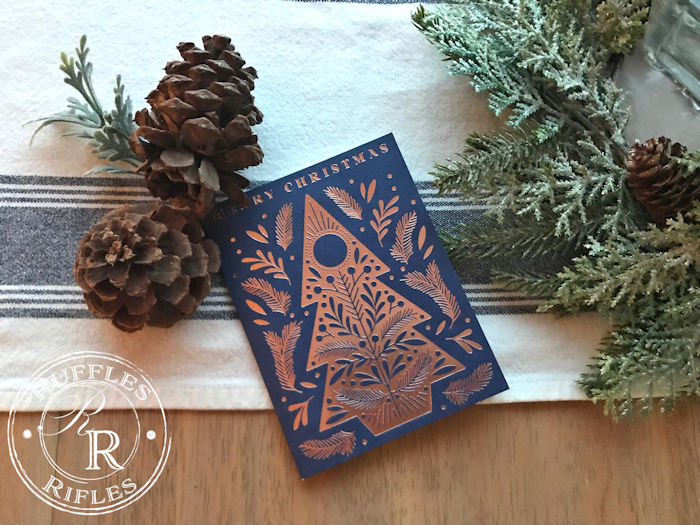 So I painted the little horse Artissimo and started drawing with chalk little Nordic folk art designs I found all over the internet.  I slowly painted away, sitting in my studio as my family would enjoy tv nights.  And while its not perfect, and I don’t know the right paint strokes or brushes for such an endeavor, I am still quite pleased.  And pleased, that the very thing I presumed I had ruined turned out beyond anything I could have imagined. 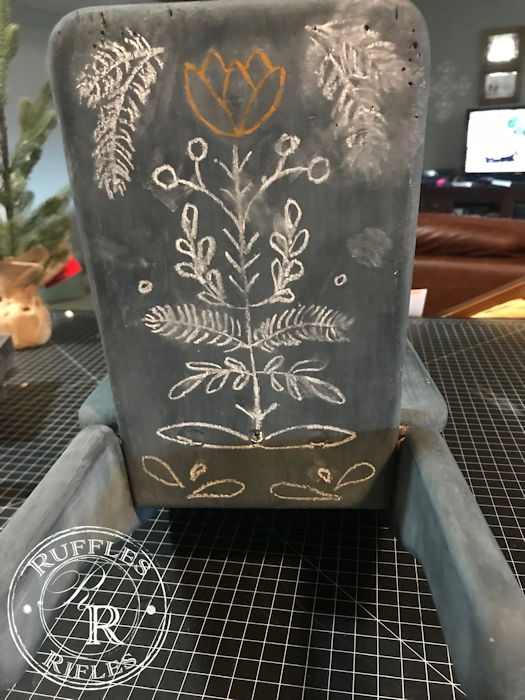 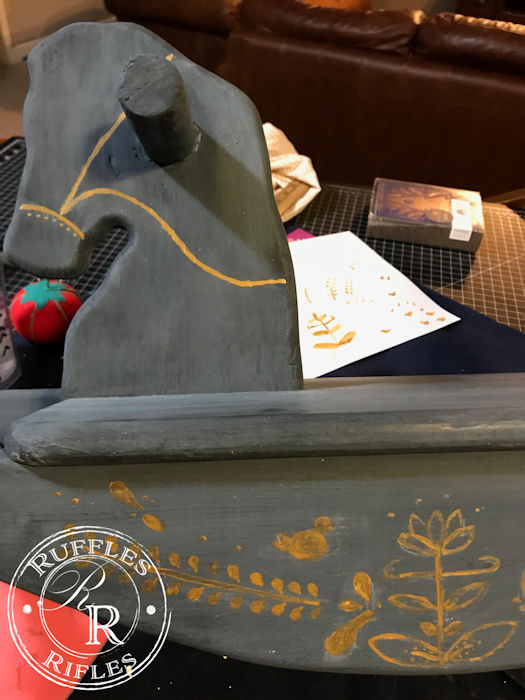 I finished the rocking horse with a coat of Miss Mustard Seed’s Hemp Oil.  It brought out the deep blue of the Artissimo, and lets the gold glimmer with the light.  The little rocking horse sits above our china hutch, the deep navy blue drawing from the blues within the cabinet.  Sprinkled with some cedar and seeded eucalyptus.  I had every intention of selling it before I started painting it.  But now, I think I might hold on to it, at least for a little while. 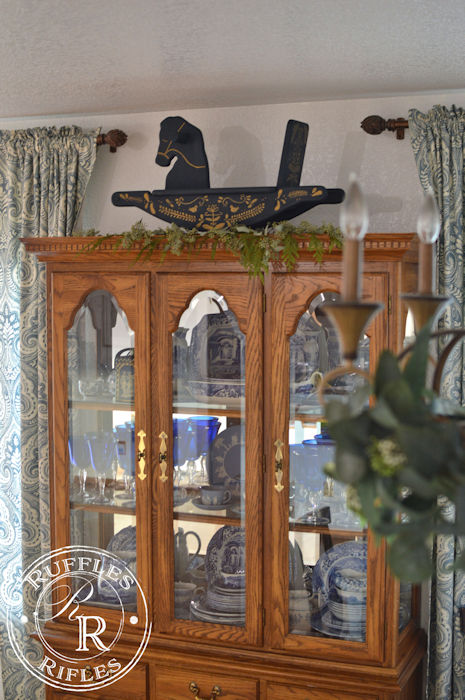 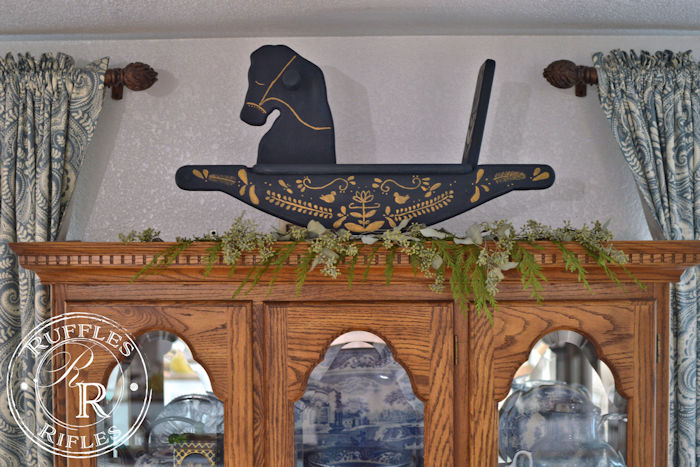 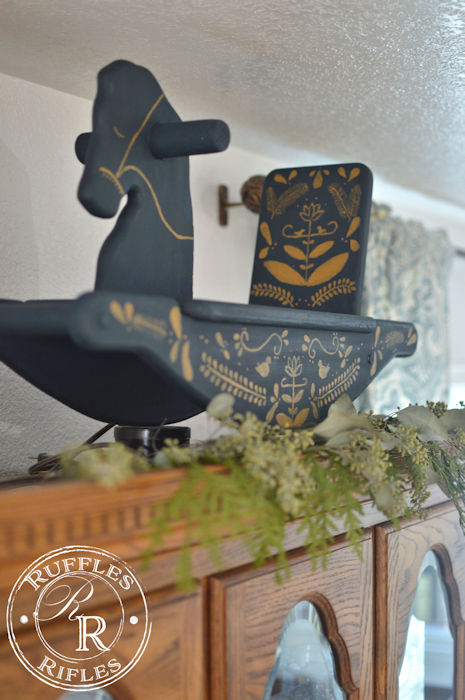 The back is perhaps my favorite. 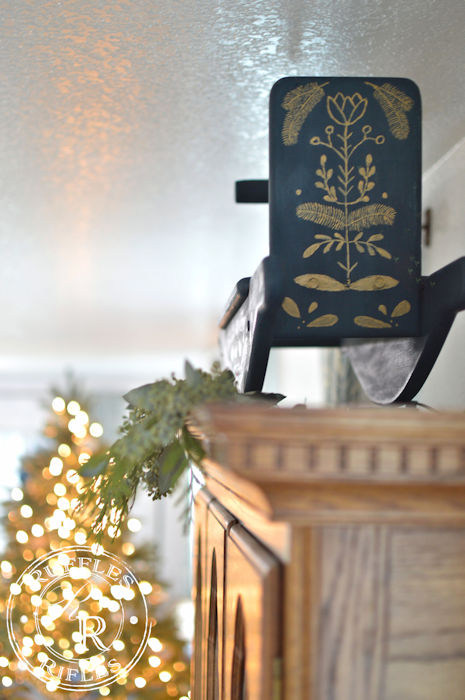 I finished it off with a lighted evergreen garland.  I love the sparkle and Christmas glow. 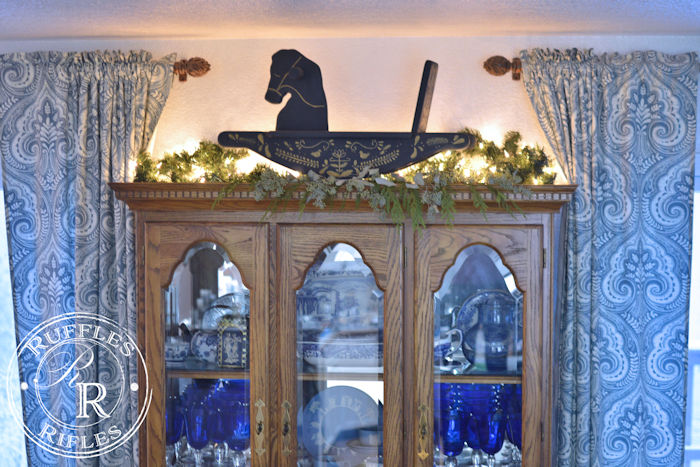 The rocking horse mistake didn’t end with a story of DIY Gone Awry, it ended with inspiration.  God wastes nothing.  He always has a story of redemption waiting to be written. 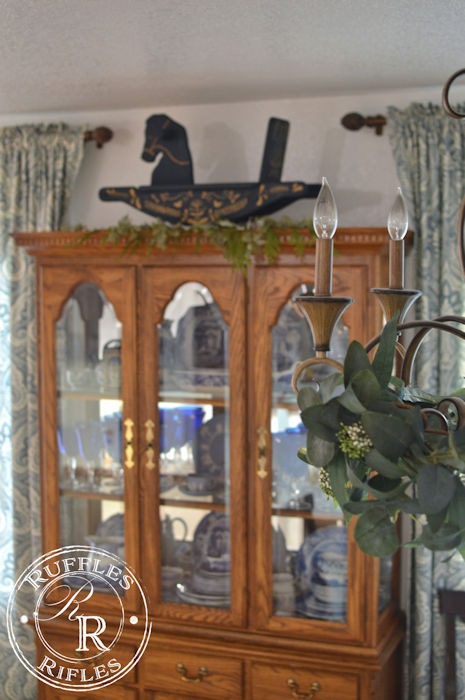 Merry Christmas friends.  Thanks for coming by once again.

P.S. After the earthquake, I found the rocking horse had fallen on his side atop the china cabinet, but thankfully, he didn’t fall off.

6 Responses to Nothing is Wasted: A Tale of a Scandinavian Rocking Horse