Home » Furniture » The Little Settee That Could

Perhaps you remember, a couple posts back that was a couple of months back where I started telling a story of a settee.  You can read the beginning of the story here. This is in all fairness, Part 2.  It’s the part of the story we all like where the hero overcomes adversity and the climax is finally resolved, resulting in a beautiful completion of a very dramatic and did I mention long story?

In short, I shared how I spied a settee on craigslist, and my husband so graciously hooked up the trailer and found a little house in the woods where we exchanged money for this brown and variegated settee to become the dream I saw in my imagination.  We brought it in the house and lived with it brown, pink, yellow and all — where my husband decided the definition of settee is actually “a very old uncomfortable couch.” He also chided that this would always remain in its ugly form and we might as well use it for firewood (I also entertained such thoughts along the way).  But, I persisted. 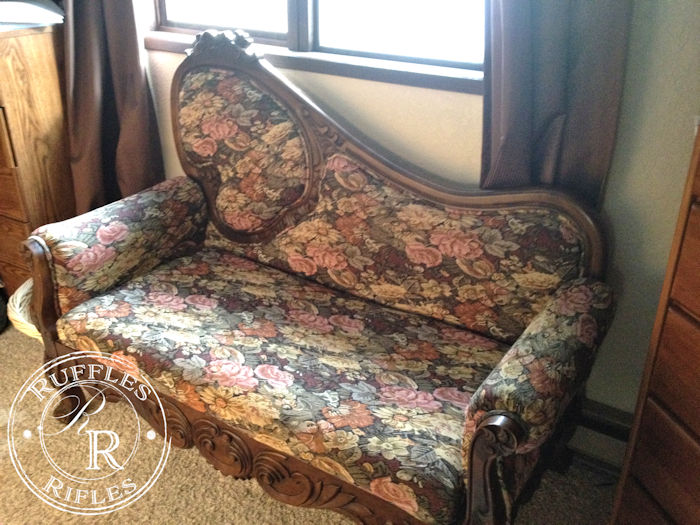 The night I glued the last bit of double welting trim on the settee, I took a photo and shared the moment with my hubby who was away.  Because it was indeed momentous.  That Little Settee Chat could and I topped that mountain as perhaps the longest furniture project in history was completed.  And the metaphorical cover was shut (or in this instance my glue and staple guns) and those magical words I could practically see dancing over my head “The End” and because this settee so elegant, it speaks French and said, “La Fin.” 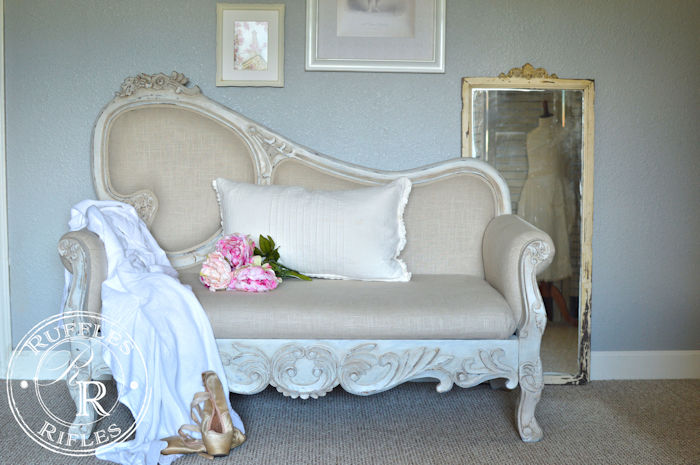 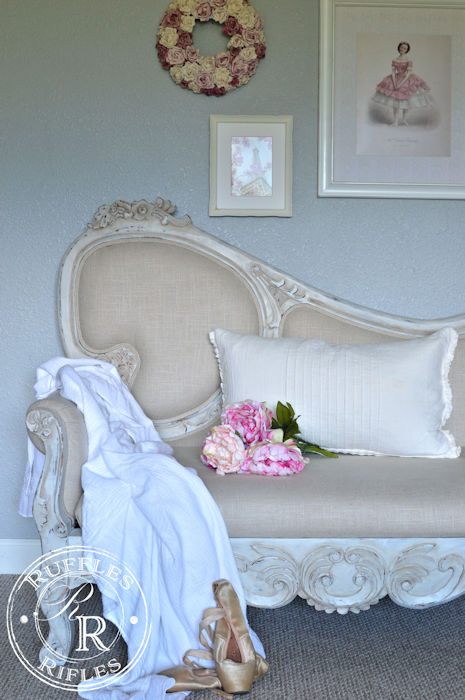 The details.  I sanded and painted the frame with many different shades of Miss Mustard Seed’s white paints in layers with the bonding agent (I used Farmhouse White, Mora, and Grainsack.  It was a pretty shiny finish before, so I wanted it to grip.  After the paint was dry, I lightly sanded the edges giving the worn look and then used Miss Mustard Seed’s Furniture Wax and Antiquing Wax. 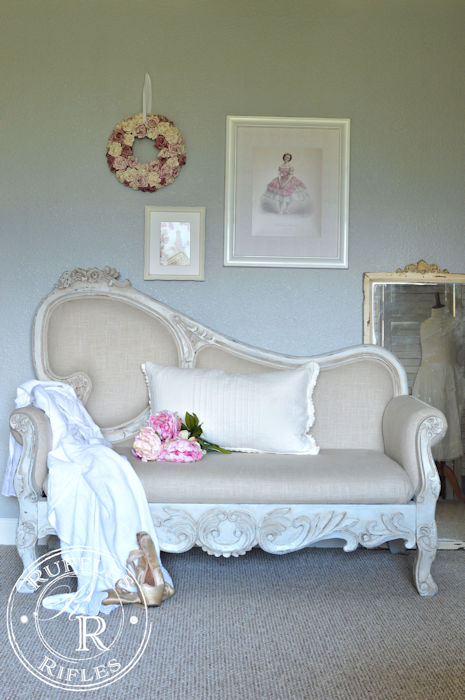 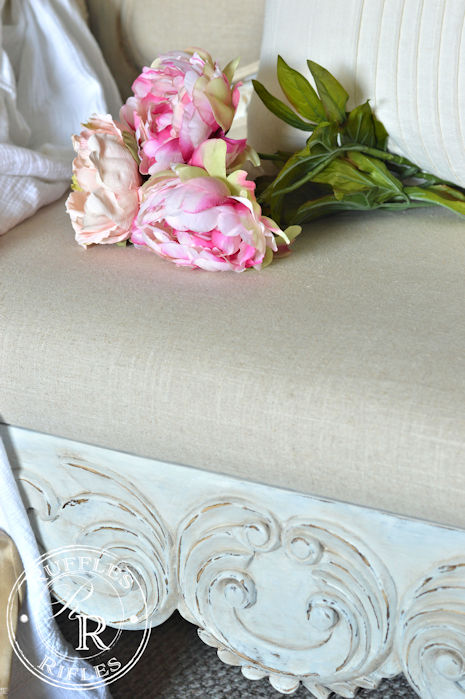 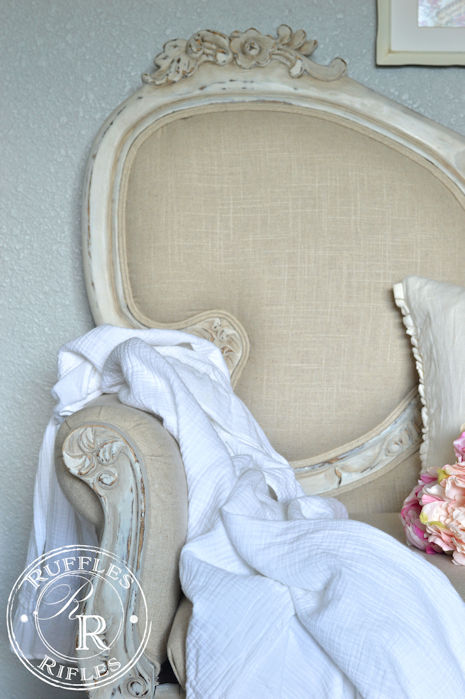 The upholstery was an oatmeal colored, heavy-weight linen I ordered from fabric.com about four or five years ago for the settee.  This was fabulous fabric to work with. I love the color, the nub and the weight.  I also sprayed many layers of scotch guard over the finished fabric so as to minimalize accidents that could occur. 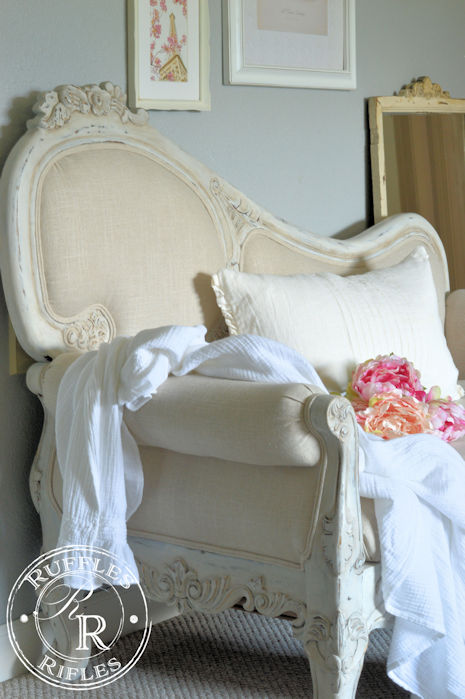 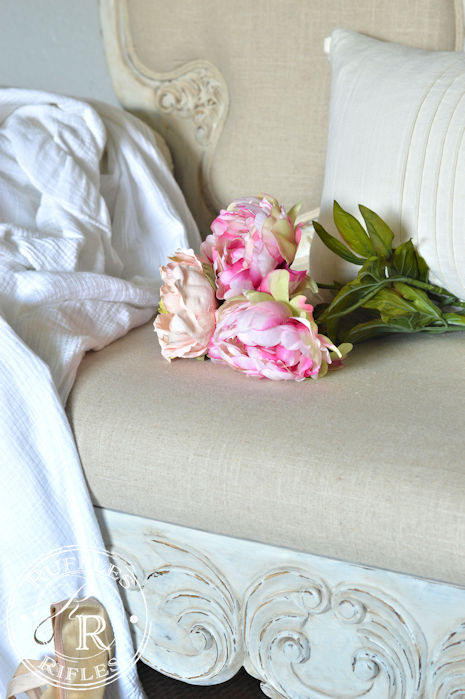 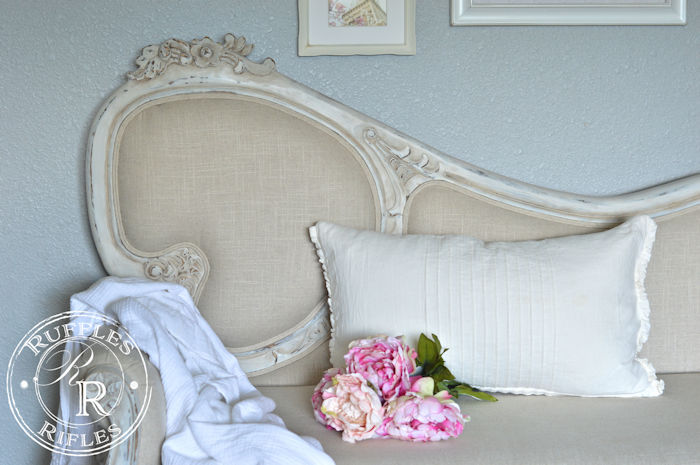 The trim I decided to finish in double-welting.  It is my favorite trim.  I have used gimp trim on some projects, but double welting gives it such a professional finished look.  (You can find a tutorial I made on double welting here.)  I didn’t know whether I would sell it or keep it, but when you’ve already spent three years on a project, I knew another three weeks wouldn’t be an issue. 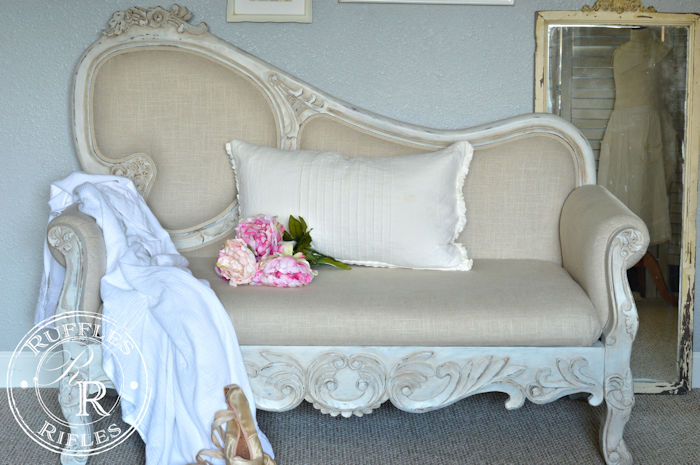 I did a photoshoot with the settee downstairs, where it has been worked on for the last three years.  It looked so pretty I wanted to keep it there (which would have disrupted our family room completely).  I questioned keeping this silly couch settee, or selling it.  Originally I had wanted it in the entry way (before we had a dog), we have a large entry way and it is essentially his room.  As wonderful as a dog as he is, I don’t think this is dog-bed worthy.  I tried it in our bedroom, and it was ridiculously big.

I did find a place for it, at least for now.  But that my friends, is for another post. 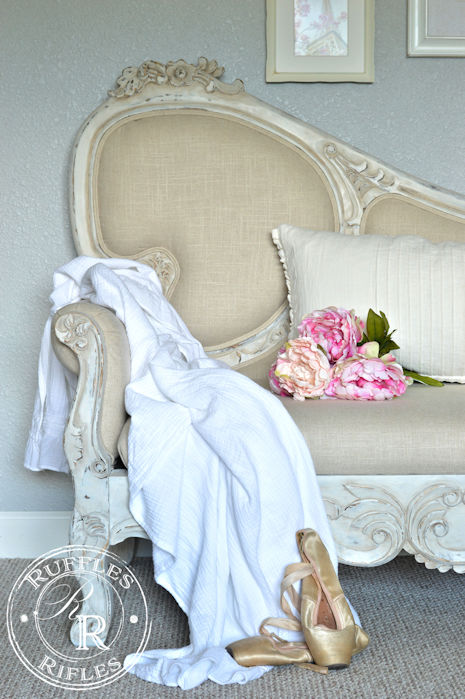 10 Responses to The Little Settee That Could