Home » Devotional » New Light Fixtures and the God Who Sees

Our first year of marriage, like so many newly weds we were poor. I mean really poor, like we only could claim $8,000 worth of income on our first year’s taxes. Obviously, we experienced God’s supernatural provision day after day. And as stressful as it was at times, it also was foundational in our first years to know beyond a shadow of a doubt that God would take care of every need.

But sometimes, the God of all creation peers down, and looks with eyes that see beyond our basic needs and into the desires of our hearts.

The house we lived in when we were first married was miraculous provision. It was mostly dry (it had a couple leaks when it rained), it was warm, it had several bedrooms, enough space to entertain. It had an incredible view of the mountain we still look at everyday. But the house was stuck, stuck in an era from when it was created and burdened with décor of a grandma’s rejected items. The house décor, fixtures and interior were a relic from the 1970s and in 2004 that wasn’t necessarily envogue.  I purged the house of the museum jello molds adorning the walls, and the doilies that covered every horizontal space, and in general decluttered the space.

I got to exercise the art of contentment. And really, I was for the most part. There were things I would train my eyes not to see, to look past and see beyond, the blessing that we lived in everyday. We were blessed with new paint and carpet as some generous wedding gifts. But there were things that desperately needed updating. One of them being the light fixtures.

The living room had a vaulted pine ceiling with dark wood beams, accented by nothing less than brass spot lights. Sometimes you didn’t know if you were supposed to get up and do a song and dance or just hide in the shadows, but they were obnoxious. The dining room had an indescribable brass and brown chandelier. It was quitensential 70s. The kitchen shared the living room’s adoration in showing off with brass spotlights. But perhaps the lights that grated on me the most were the lights adorning our master bedroom. Mounted sconces on either side of our second-hand sinking, queen-sized bed were telescope brass lights, in a time warp, waiting for camera’s to shoot the next episode of The Brady Bunch. 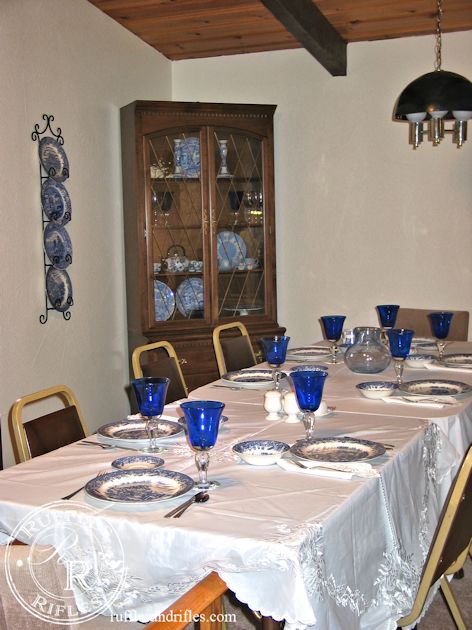 One day in the midst of our scraping change out of the back of the couch to treat ourself to a McDonald’s ice cream a giftcard came in the mail. It was in all it’s orange glory from the Home Depot, our address clearly marked on the envelope, marked with someone else’s name, thanking the customer for their purchases. In all curiosity my husband took it there, and tested it on a bottle of Diet Pepsi. Does this orange card even work or is it merely a ticket to draw more customers in?  In all surprise, he found the giftcard worked. And then he was overcome with conviction, a card that came to us, but had a different name.

The next day he returned to Home Depot, confessing to customer service his misdeeds, and $1.02 to pay for the Diet Pepsi he had redeemed from the $300 giftcard. But to his great surprise, they did not reprimand him, but said, the mistake was theirs. They had no way of giving the giftcard to the named individual and that we could use the $300 on whatever our hearts desired.

We were blown away. When you barely have money for groceries, $300 felt like a gold mine of opportunity. And so we bought lights. New sconces for the bedroom, more subtle track lights in the kitchen, a pottery barn looking chandelier for the living room providing a rustic feel, and a pretty light over the dining room table.

I could never look at the chandelier without remembering the God that sees beyond our basic needs to the very desire of our hearts. The chandelier went with us to our second home. It hung above our table where everyday it silently told a story, of the God who created light, and saw the desire of a heart who longed to be surrounded by beauty. 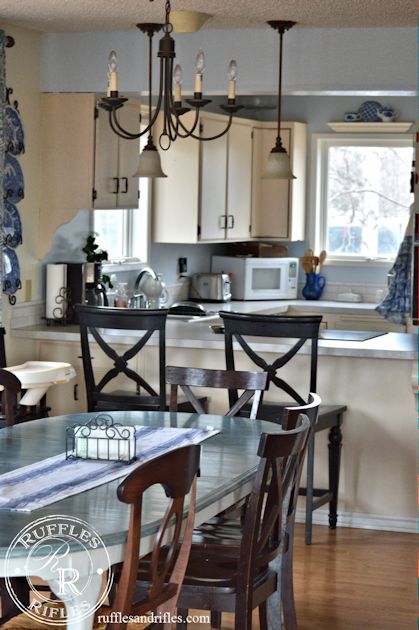 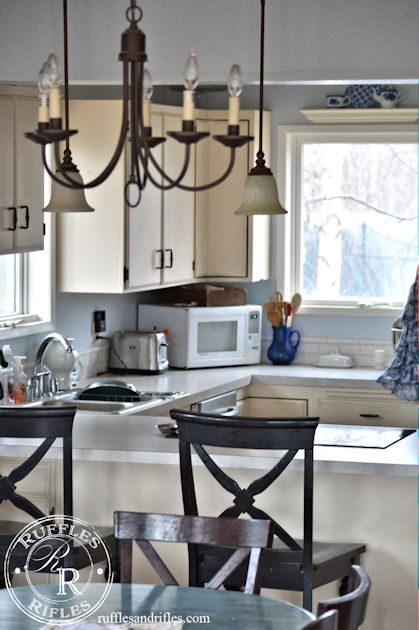 The chandelier didn’t come to our new home. Although I will always be sentimentally attached to it, because of the story that it tells. For our current dining room I found a French Country looking chandelier going out of stock at Home Depot, to replace the track lighting above the table. 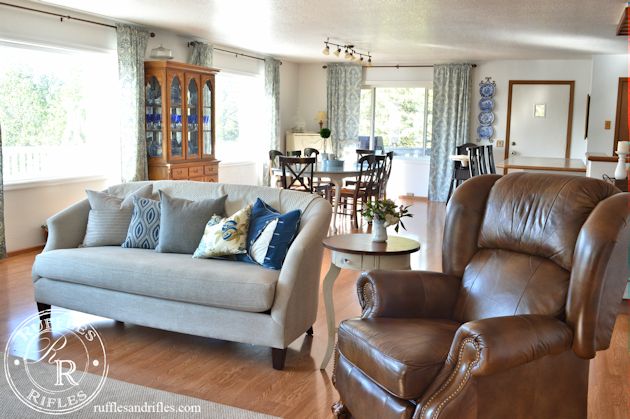 Before – with the track light

On Father’s Day my hubby decided to replace our dining room and entry way lights. My five year old piped up, “Hey Mom, aren’t you supposed to be working for Dad on Father’s Day?” I got a chuckle out of that, and to my credit I never asked or nagged him about the lights, he did that on Father’s Day of his own volition.

I love, love, love the shape of our new dining chandelier. I’m still not 100% sold on the color, it may succumb to some chalk paint sometime in the next year, but for now, I am immensely satisfied by the curves and details that speaks French Country over our dining room table.  (Also, a disclaimer, I am having camera troubles.  My camera fell off of my tripod after my kitchen photo shoot a couple weeks ago, my photos are not as clear as normal, and it just plain old gets stubborn and won’t take photos sometimes now.  I am sick about it, and looking into getting a new lens which seems to be what was damaged in the fall.) 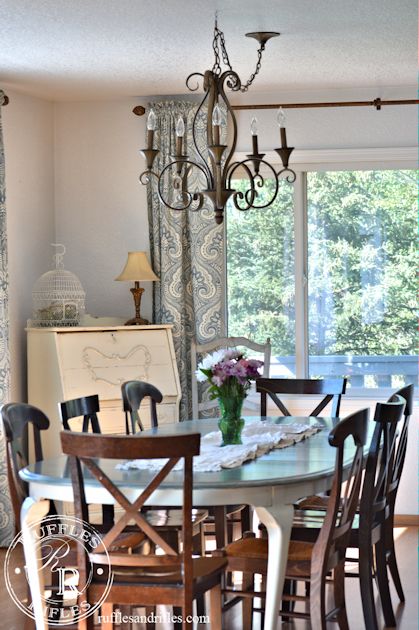 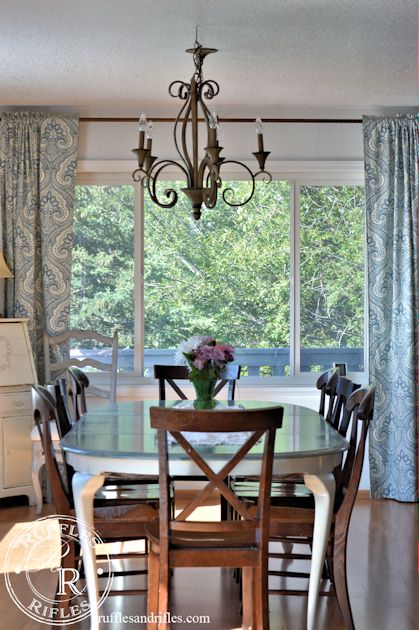 I also love the entryway chandelier that replaced the dated fan. 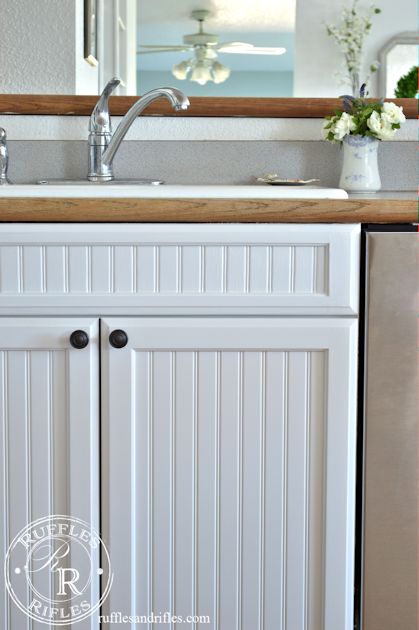 Before – fan in entryway

I found that at a thrift store a couple of years ago, knowing it would go in an entryway of a new house, although I hadn’t envisioned this house. But not surprisingly, it’s perfect. 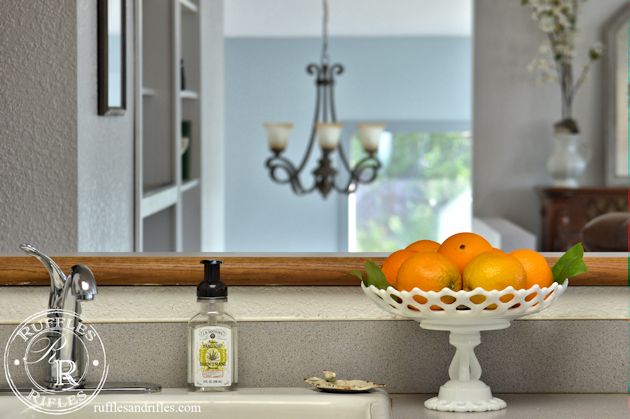 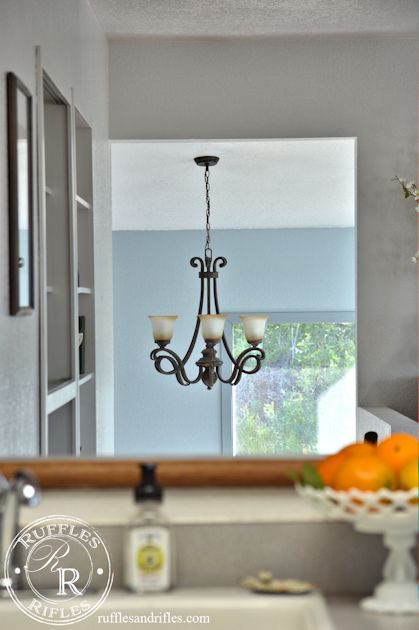 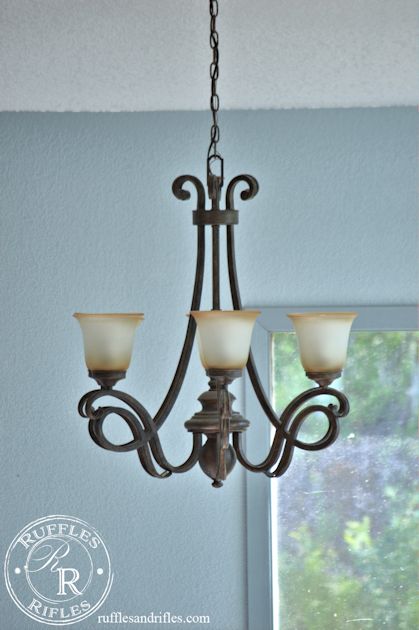 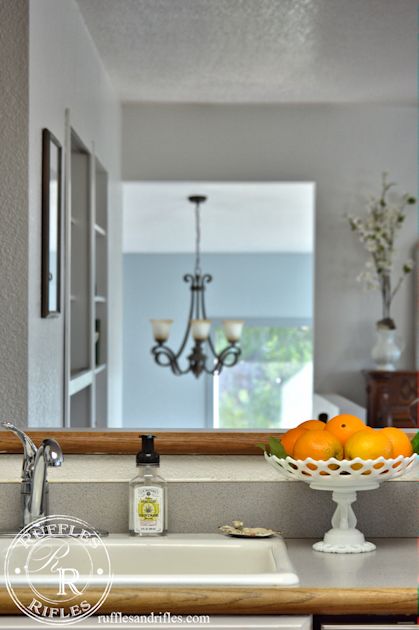 I also just found that charming little milk glass pedestal stand at a thrift store for only $4.50 because it had a little crack in it.  But it makes a beautiful fruit bowl!  My hubby was with me and made fun of me for “yuppie dumpster diving”, but I think it’s charming.

Be blessed, today friends.  And as you turn on the lights, let it be a reminder of the God that sees.

4 Responses to New Light Fixtures and the God Who Sees